The Wiggonholt Association is opposed to all six options for the A27 Arundel Bypass put forward by Highways England.

Firstly, each of the options will, to a greater or lesser extent, cause substantial damage to the environment and affect the South Downs National Park and its setting. In this connection we refer to the position taken by the SDNPA.

Secondly, all the options are predicated on, and intended to facilitate, the anticipated increase in vehicle traffic in the South East. In practice they are thus unlikely to reduce congestion and shorten journey times either on the A27 or through the surrounding towns and villages. They also run counter to the political and legal obligation on public bodies to reduce exhaust gas emissions resulting from the government’s decision to commit the United Kingdom to achieving net zero greenhouse gas emissions by 2050.

Rather than building new roads Highways England should consult the public on a wide-ranging review of current policy in this sector with a view to creating a sustainable transport system taking account of climate change. Future investment in transport infrastructure should focus on improving public transport, in particular the bus and railway networks. Investment in roads as such should be confined to measures to improve road safety, remove bottlenecks and facilitate access by local communities, as well as creating a comprehensive cycling network.

This is an unusual consultation. It is in fact the third time the public is consulted on the A27 Arundel Bypass. That is only happening because the preferred route selected by Highways England after the 2017 consultation was challenged in the High Court (notably by the South Downs National Park Authority). Highways England has now put forward a revised set of options incorporating “new information”.

It is an unusual consultation in another respect. Four of the six options are subject to the explicit proviso that they can only go ahead if sufficient finance is forthcoming. In spite of the subsequent clarification by Highways England that all six options remain on the table there is a strong presumption that the final choice will be between the two remaining options 1V5 and 1V9. Indeed, the consultation response form specifically asks respondents to indicate which of these two options they would prefer in the event that the other four cannot be financed.

There is a further aspect to this consultation which is not referred to in the document supplied by Highways England. The political context has changed in a fundamental respect since the A27 Arundel Bypass was first proposed in the context of the Government’s 2015-20 Road Investment Strategy. Climate change is now recognised as the greatest challenge facing our society, going far beyond the mere protection of the environment in the traditional sense. Reflecting this political reality, the government recently adopted a legally binding target for the United Kingdom of net zero greenhouse gas emissions by 2050. The governor of the Bank of England has warned the City that banks and companies must adapt to the reality of global warning. In the South East most local councils have declared a climate emergency or passed a meaningful motion on climate change, and are now considering what action to take. At its level the Wiggonholt Association, a charity committed to the protection of the rural and built environment, organised a public forum on climate change held in Pulborough on 18 October.

This new political dispensation is not reflected in the revised proposals for the Arundel bypass. According to the consultation document supplied by Highways England these are explicitly intended to improve capacity on the A27 so that it is able to cope with future economic growth. Reducing congestion and shortening journey times, which are among the other stated objectives of the scheme, would be welcome but past experience suggests that this will merely increase vehicle traffic as attested by numerous studies. By encouraging the growth in traffic the scheme will inexorably lead to increased carbon emissions and thus jeopardise any hope of meeting the zero emissions target.

It is worth pointing out that transport (mainly cars) is the largest source of greenhouse gas emissions in the UK (27%) and that its share has been steadily increasing. The Committee on Climate Change, an independent body which reviews government policies, has stated that a shift away from car use will be necessary if the 2050 target is to be met. There is a recent example of an important road infrastructure project being cancelled: earlier this year the Welsh government halted a £1.6bn scheme for an A4 relief road - a 6-lane motorway south of Newport to reduce congestion - partly because of Brexit-induced financial uncertainty, partly because of the adverse environmental impact.

The Wiggonholt Association (1) has a specific interest to declare in connection with the Arundel bypass proposals. The consultation document refers to the prospect of reducing the volume of traffic currently diverted through neighbouring towns and villages such as Storrington where it causes severe air quality problems. In the 2017 consultation we selected the option most likely to reduce through-traffic in Storrington, taking the figures for the estimated reduction in traffic flows down the A29 as a proxy for the notorious A283/B2139/A29 ‘rat-run’. However desirable any relief would be, it is likely to be temporary and overwhelmed by the continuing increase in road traffic nationally and in the South East.

(1) Wiggonholt is a small settlement situated on the northern edge of the South Downs National Park off the A283 mid-way between Storrington and Pulborough.

You’ll remember that a list of minerals sites was published in July last year and there was a consultation which lasted till September.  These sites, as I’ve mentioned, included the site at the Wickford Bridge, Pulborough, and the site at Horncroft.  These, you’ll remember, were notable not least because it was claimed they contained silica sand and were in the National Park.

Earlier this year the results of the consultation were published and the Sites Study document was updated last month.  There is now more detail about the Wickford Bridge site but still no information about an operator and there is no comment from, or on behalf of, the landowner.  However it is now proposed to remove and store the topsoil and for the site to revert to agricultural use when the operation is over.

What comes out most strongly from the consultation is the response of Southern Water which has major concerns not only about the protection of groundwater for the public drinking supply (the site is in an extreme SPZ3 area) and hence the aquifer, but also about air quality.  SW further identifies that its infrastructure such as wastewater and other water pipes cross the site.

The Horncroft site has a long comment from the Minerals Planning Group which advises the landowner.  According to MPG, a leading producer of silica sand (SIBELCO) has identified a significant resource of very high quality silica sand suitable for glass manufacture.  The Barlavington estate would seek to develop this source independently if SIBELCO withdrew.

No more sites have been removed from the Plan as a result of the consultation but many, including these two, will now go through a series of studies (including a Soft and Silica Sand Study) to provide further technical evidence.  There will be “exceptional circumstances” and “public interest” tests of all sites in the National Park or the AONB and based on the results of these a shortlist will be produced and this in turn will go forward for detailed technical assessments including Transport, Sustainability, Habitats, Landscape Sensitivity and Capacity, and Flood Risk. 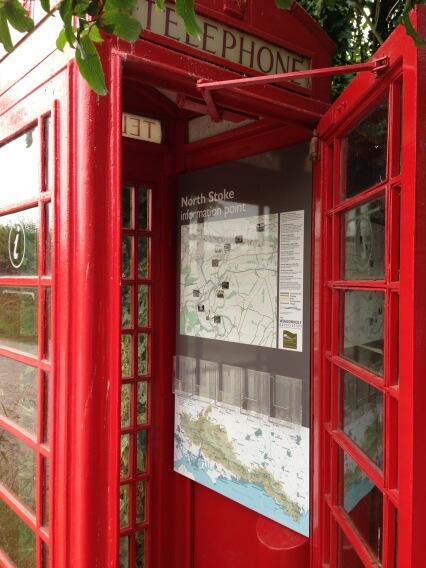 The WA acquired the kiosk for a nominal price of £1. It is situated in the South Downs in the rural hamlet of North Stoke near Amberley and is frequented by walkers and by visitors to the ancient church of St Mary the Virgin North Stoke. The Association has transformed the kiosk into a SDNP Information Booth. After restoration, it was fitted out with local information in consultation with the Park Authority. The work was partly paid for by donations and the Association's own funds, whilst the Park's Sustainable Community fund covered the interior graphics.